Teenber is an app with an extremely familiar name, layout, well, actually everything. If you’re thinking about Tinder – we have a winner! Yes, this was actually marketed as “Tinder for teens,” only without the free functions, gigantic member base, and geographical restrictions. Teenber is one of the teen dating sites that aimed at making teenagers’ life online a bit easier and take them away from social media to specialized websites and apps where everyone seeks love. They were supposed to become a platform free of judgment, prejudices, and toxicity. Did they succeed in making a perfect dating app? That’s what this Teenber review is about!

There were three simple premium dating plans on Teenber. If you wanted to communicate with fellow teens, you could purchase one of them and see how it worked out, as despite being ripped off its “big brother” Tinder, Teenber didn’t have free features, only a bare minimum, like registration and creating a profile.

One month of subscription was available at only $4.99, three months came with a small discount at $13.99, and you could’ve purchased access for half a year for $24,99.

Teenber dating features could have been described with only two words – swiping game. Let’s elaborate, though. When you use a site or an app with the swiping game, you are presented with the deck of users, one by one, and choose to you like them or not by swiping left or right. Simple enough and quite addictive, as you don’t know who the next possible match is going to be! If they like you in turn – it’s a match, and a dedicated chat between you two opens up in a “conversation” tab for you to flirt and discuss your dating future. Simple – yet effective, and just like Tinder.

How to Start Dating at Teenber

Simply – now you can’t. But how it DID work? Well, Teenber faired quite well for a teen dating site, demanding proof of verification when someone decided to use it and offered a fairly long registration process with not only filling out your age and gender but a school, for example. There was an alternative, though, as members could sign up from Facebook and skip all of the annoying steps to get to this dating app.

Then it was time to enjoy the swiping game. Like each other and get a match, talk to each other, and start dating. Teenber wasn’t creative in it, but it was effective. 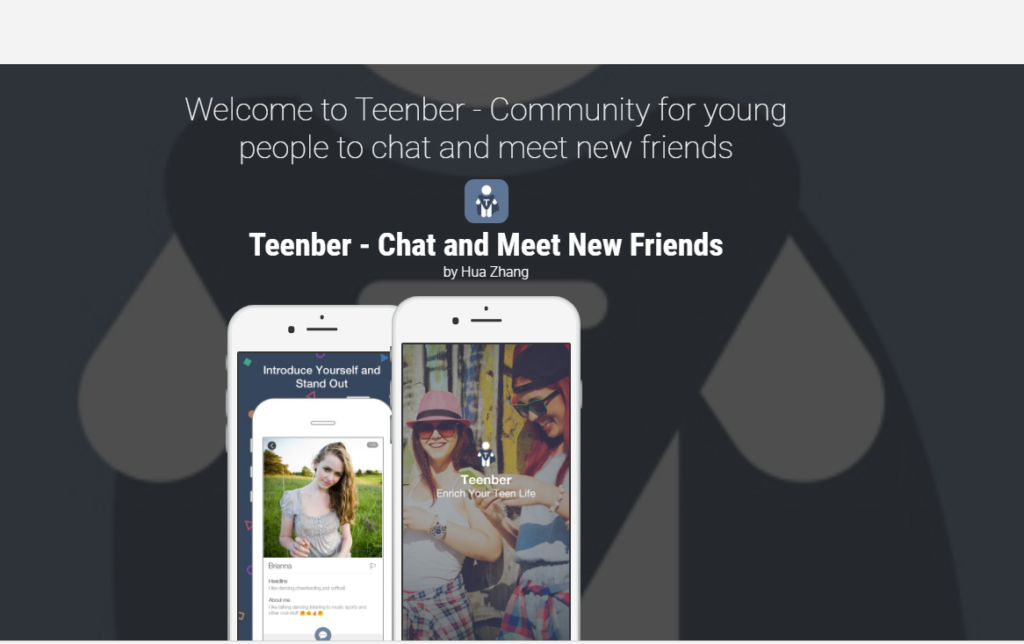 As we told previously in our review, you could’ve picked two routes – a long one or a short one for dating at Teenber. The long one included the list of 19 text boxes you needed to fill with personal information, and the short one was to press a button “Sign up from Facebook.” A convenient option that more dating websites should adopt!

Since there were not groups, forums, or dedicated search functions on Teenber dating service, all users could do was to use the swiping game to make contact. What set it apart from Tinder was the radius – a 100-kilometer radius could work for a bigger app, while Teenber couldn’t afford anything like it. So, members could pick how far they want to go on their adventure manually – from a neighboring town to a whole world. Besides, there was an interesting feature – if one wanted to find a pen pal in another school and signed up with their school’s email, the app was free to use for them.

Once members signed up on Teenber, dreaming of matching with other members for fun dating or strong friendships, they could not have started chatting right away. First, they had to have a match – like a person who liked them back. That was the single condition that the chat window would open for them both. Then, users could send each other text messages, pics, short videos, and everything else common on the dating apps.

Profiles at Teenber were what you could expect from a dating app with a Tinder-like layout. Just like in its older brother we mention so often during this review, Teenber made dating profiles simple – members could upload a few pictures of themselves and write a short bio, mention who they are looking for or what makes them excited – only a few introductory lines and that’s it. For an idea of a dating app based on a swiping game – what else can you ask for?

Considering teenage dating sites and how they are done, Teenber had an amazing security layout. All members’ data was encrypted and protected by SSL algorithms. To sign up, users had to confirm their email and age, and moderators reviewed photos before allowing you to attach them to a profile to ensure they are SFW and as real as possible. Even more so, you could have locked the photos tab only for your matches to access, which was a fantastic feat in protecting teenagers’ privacy.

Does Teenber track my location?

When it was active, Teenber actively tracked your location due to its location-based dating and matchmaking algorithm.

Is it easy to create an account with Teenber?

How long is the satisfaction guarantee program on Teenber?

There was no satisfaction guarantee program on Teenber; the only option to cancel your premium membership was to disable its automatic renewal in the account settings.