Home Blog 18 Signs You Are Dating a Nerd

18 Signs You Are Dating a Nerd 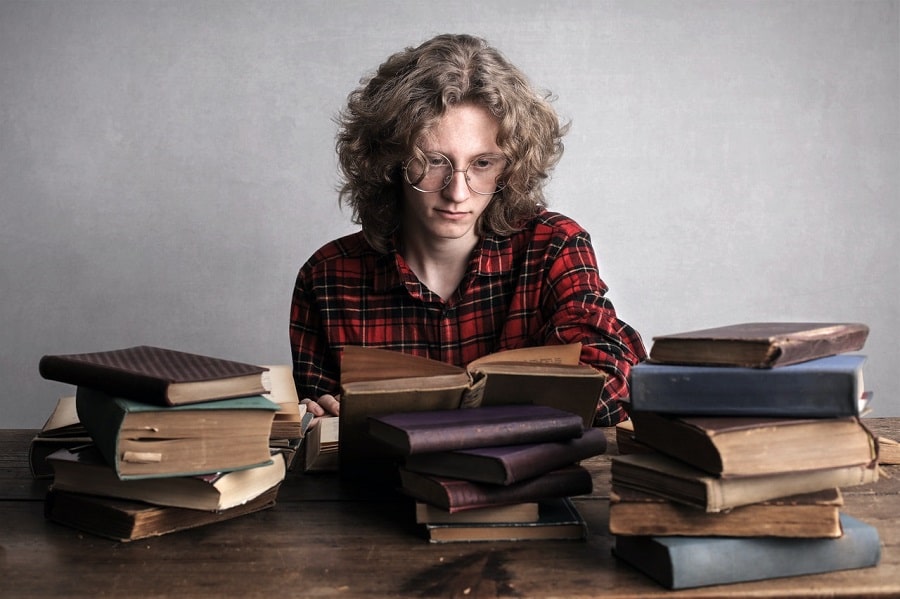 1. They Hardly Pay Attention to You When Playing Game

Nerds tend to be in a different world whenever they are playing video games. If you ask them to help you with something at that particular time, they would ask you to hold on for a while. Nerds take their game time very seriously, so you should learn to cope with it. This is one of the most obvious signs that your boyfriend is a nerd.

Nerds are always interested in challenges because it makes them feel active and alive. You must have wondered why he spends so much time trying to solve a puzzle or trying to get past a particular stage in a game. Those are some of the things that interest in the most. Your nerdy boyfriend will sometimes try to invent his puzzles or purchase new ones when the old ones get too easy.

3. He Loves the Bookstore

Are you used to waiting for him anytime he goes to the bookstore or library? Nerds are book lovers; some will even tell you that the books’ smell is one of the best scents ever. If your partner loves spending more time at the bookstore, he is likely a nerd.

Nerds, most times, are not interested in beauty. They are surprisingly interested in intelligence. Have you noticed that your boyfriend finds intelligent people sexually attractive? If you have noticed this, you are probably dating a nerd.

5. He Corrects Improper Use of Grammar

If your partner is the type that tries as much as possible to correct people whenever they speak incorrect grammar, he is probably a nerd. They are always particular about using the proper tenses.

6. He is Super Curious

Nerds are always interested in asking how and why things are the way they are. They read a lot and carry out researches to get the answers they seek. If your boyfriend is the nosy type, he is probably a nerd.

7. He Goes to Bed with His Laptop

Nerds find it challenging to stay away from their laptops. Does your partner take his laptop to bed every time till he falls asleep unconsciously? This is an everyday activity for nerdy people.

8. He Acquires New Gadget the Day It’s Being Released

Is your partner one of the people that acquires newly released smartphones or gaming consoles the same day it was released? It is one of the greatest feelings of nerds to cop the newly released game on its official release date.

9. He Prefers to Be with His Books Than to Hangout

If your boyfriend will rather stay at home and read one of his books instead of going out, he is probably a nerd. They prefer a calm environment.

10. He Is Selective About the Movies He Watches

Nerds don’t just sit down with you to watch any movie; they have specific standards when it comes to seeing movies.

11. He Downloads Lyrics to Music

Geeks believe in good music. They love to listen to songs that have good lyrics. They go as far as looking for the lyrics of the song on the internet to be sure of what the artists say.

12. He Has More Friends Online Than in Person

Does your boyfriend prefer to make friends and talk online instead of in person? This is one of the common habits of the nerds.

13. Reading the Dictionary is a Habit of His

Most people only pick up the dictionary whenever they are interested in checking a specific word or meaning. However, nerds study the dictionary because they want to.

14. He Uses Technical Words While Talking to You

Does your boyfriend love to talk in codes instead of being direct? Maybe he says he refers to sleeping as recharging, or he refers to studying as uploading. You are dating a nerd if this is common to him.

15. He Loves to Communicate with Memes and GIFs

A nerdy boyfriend loves to chat and flirt with GIFs and memes. Does your partner love to do this?

Nerds are critical thinkers, which makes them very good at Mathematics.

17. Their Workspace is Always Messy

Nerds are always busy with one thing or the other. Either they are reading, playing a game, or watching comics; so, they don’t have much time to arrange.

18. His Date Ideas Are Always Weird

For nerds, their perfect idea of a date night is either staying in to play games, re-watching one of his favorite anime, or reading a book together.

Dating a nerd is fun. Do not worry that your partner might be a nerd because many advantages are attached to dating a nerd. The above tips will help you realize whether you are dating a nerd.